SeanSweeneyAuthor.com is proud to announce the release of the author’s 19th novel, THE LONE BOSTONIAN. It is a dystopian novel set in the year 2115, starting in the author’s favorite city, Boston.

“THE LONE BOSTONIAN, much like Jaclyn, came to me in a dream last year,” the author told his website. “This was a story begging to be told, and I’m happy that the book is now available for readers everywhere to check out.”

The story centers around a calamitous event that begins a chain-reaction up and down the East Coast. One hundred years in the future, the United States is recovering from another world war and an economic downturn, which is aided by a Chinese company called Gong & Dinow. The company produces a tablet computer that everyone owns, and has a plant in many major cities.

“It’s one of those things that the technology comes back to bite you in the butt,” the author said. 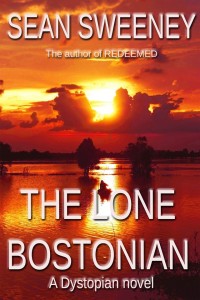 , and will be available on Apple iBooks soon.